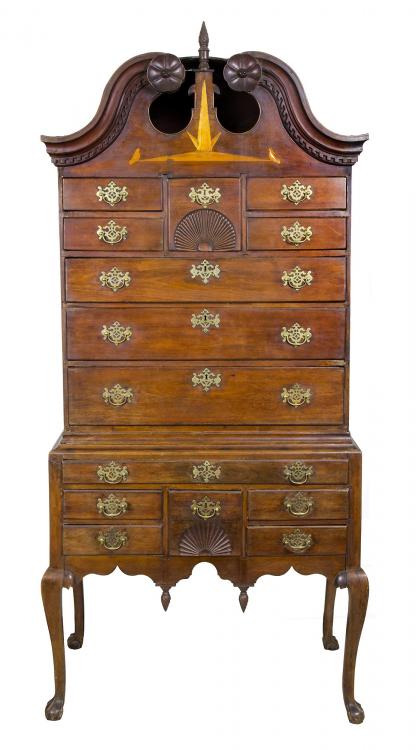 On Wednesday, May 14, 2014, I examined a cherry New England high chest of drawers with inlaid pediment and tulip poplar and white pine secondary woods.  This report summarizes my opinions regarding the high chest and its condition.

The high chest is made in two parts.  The upper case has a high, enclosed, scrolled pediment with a central turned finial ending in a spiral peak.  Visually, the finish on this finial appears consistent with the rest of the object, suggesting that it might be original.  Microscopic finish analysis may provide more certain evidence.  The high chest never had side finials.  The pediment scrolls terminate in simple, but visually satisfying six-petal rosettes.  A dentil course runs along the bottom of the pediment moldings.  The cornice molding displays a noticeable rise at the ends, a rare design feature that seems to have no specific regional or maker identity.  An unusual inlay, described by some furniture historians as a seesaw, has inlaid birds at the ends.  A slender cone with smaller, flanking cones growing out of its base rises from the center.  This inlay has no known corollaries, with the exception of another high chest discussed below.  Inlaid birds are known in later clocks from the Albany region, but they are otherwise unrelated in design.  Woods used in this inlay appear to be maple (being the fine-grained wood with visible ray flecking) and sumac (being the similarly colored wood having dark grain streaks), the latter used for the birds.  The pediment also has maple cockbeading wrapped around the circular cutouts between the scrolls.

The shell carved into the top center drawer has convex rays that emanate from a point below the center of the lower circle, producing a distinctive shell design.  The shell in the lower case mimics this shell except that the rays are concave.  Two stacked drawers flank the shell drawer, creating an uncommon drawer configuration that occurs in the Connecticut River Valley, southern New Hampshire, and elsewhere.  The waist molding separating the upper and lower cases divides:  the upper half is attached to the upper case a few inches above its bottom board, the lower half, attached to the top of the lower case, forms a three-sided nest within which the upper case rests.  This construction detail is very unusual and has no apparent regional distribution.

The lower case stands on four cabriole legs that end in claw-and-ball feet.  The drawer configuration of this case again employs two stacked drawers flanking the shell drawer, all below a full-width drawer.  This configuration is almost unknown, although some dressing tables from the Colchester area of Connecticut are known.  See Thomas and Alice Kugelman, Connecticut Valley Furniture:  Eliphalet Chapin and His Contemporaries, 1750-1800 (Hartford:  Connecticut Historical Society, 2005), cat. no. 123.  No useful parallels beyond drawer configuration exist between Colchester furniture and this high chest.  Use of double-ogee undercutting in the skirt flanking a central half-round recalls some William and Mary skirt designs, but aside from acknowledging that convention, there seems to be no direct tie. (There is also no direct tie concerning the cockbeading in the pediment, which merely recalls earlier usage.)  The cabriole legs have somewhat stiff ankles above the feet.  The talons are slender, relatively unarticulated, and grasp a large ball.  These feet have no recognizable parallels in other New England work, except perhaps a general similarity to some southern New Hampshire furniture.

This high chest is well preserved.  It has an old finish that appears undisturbed in some places and partially cleaned in others.  The brasses are replacements.  All four feet exhibit rot on the bottom.  The proper left rear foot has been filled with epoxy to stabilize the rot.  Some of the legs, notably the proper right front, have splits in the cherry wood, but these splits appear stable and represent no issue regarding the soundness of the object.  Similarly, the proper left rear leg has a knot recess or depression in the back of the knee, and another knot caused disturbance at the top of the proper right front stile.  Both rear knee brackets are replacements; the others look original.  The spiral-turned drops are replacements.  The proper right front lower corner of upper case exhibits repaired cracks and a small loss to the case side.

The case backboards exhibit some chalk numbers that may or may not be original.  The chalk figuring on the underside of roof was probably done at the time of construction.  More important markings remain on the two shell drawers.  The upper drawer has what appears to be a name, possibly Poe, preceded by an initial, possibly L, written in chalk on the outsides of both drawer sides.  The lower shell drawer is similarly signed.  This name, whatever it is, is likely that of the maker of the high chest.  Poe is a name associated with Pennsylvania, Maryland, and North Carolina, but not New England.  Alternatively, the name might not be Poe.


Historical analysis:  This high chest embodies many very unusual traits.  Another high chest with many similar features was published first by Benjamin Ginsburg in “Connecticut Cherry Furniture,” Antiques 58, no. 4 (October 1950):  277-76, and was undoubtedly made by the same, unidentified artisan.  Ginsburg stated that the other high chest, then owned by Ellerton M. Jette (1900-1987) of Waterville, Maine, had come from Woodbury, Connecticut, but provided no supportive details.  Jette may have gotten this high chest from dealer John Kenneth Byard of Norwalk, Connecticut, who counted Jette among his best clients (Frick Collection, Archives Directory for the History of Collecting in America, “John Kenneth Byard”).  Jette donated it to Historic Deerfield in 1953.  The high chest was published next by John T. Kirk in Connecticut Furniture:  Seventeenth and Eighteenth Centuries (Hartford, Conn.:  Wadsworth Atheneum, 1967), as catalogue number 89.  He opined that it was “probably New London area” based on similarities of the shells to a mahogany desk and bookcase (cat. no. 128) that he called “possibly New London.”   When Dean A. Fales, Jr., published the high chest once more in The Furniture of Historic Deerfield (New York:  E.P. Dutton, 1976), no. 438, he added no new information.

Slight variations exist between the two high chests.  The Deerfield example has uncarved feet, shells that are carved in relief, and the birds are painted rather than inlaid.  Tulip poplar is not identified by the owner as a secondary wood, although published listings of secondary wood may be incomplete.  Philip Zea of Historic Deerfield believes that the upper and lower cases of that high chest originated in different pieces of furniture, based on differences in drawer construction between the two cases.  If that assessment is correct, the number of case pieces from this unidentified shop becomes three.  However, drawer construction may be different between the two cases for unusual reasons.

Existence of the Deerfield high chest lends authenticity to the many eccentricities in the Weiss example, especially regarding the drawer configuration, unusual pediment inlay, distinctive lift to the ends of the cornice molding, and carved details.  At this point, evidence is not sufficient to suggest a more specific place of origin than Connecticut or Western Massachusetts.  The high chest dates from about 1760 to 1785. 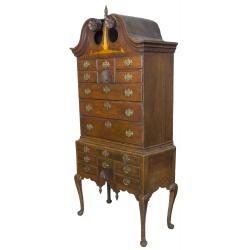 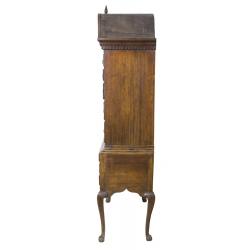 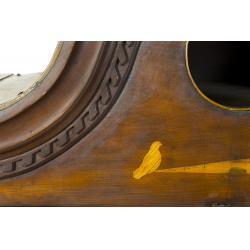 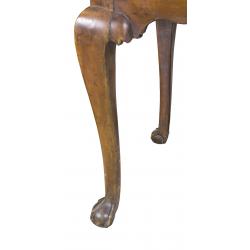 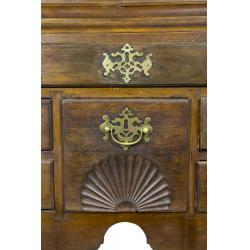 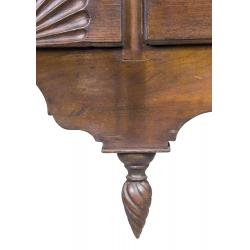 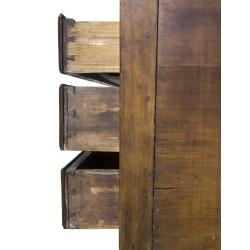 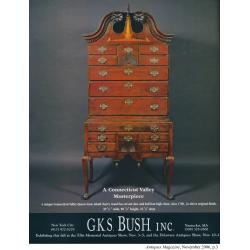 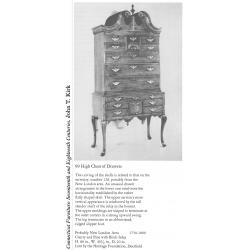 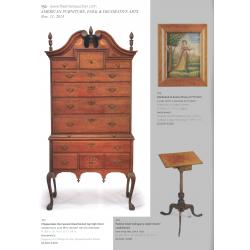 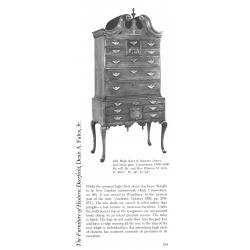 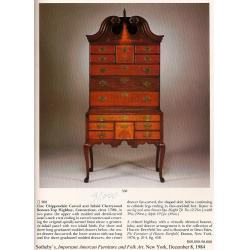