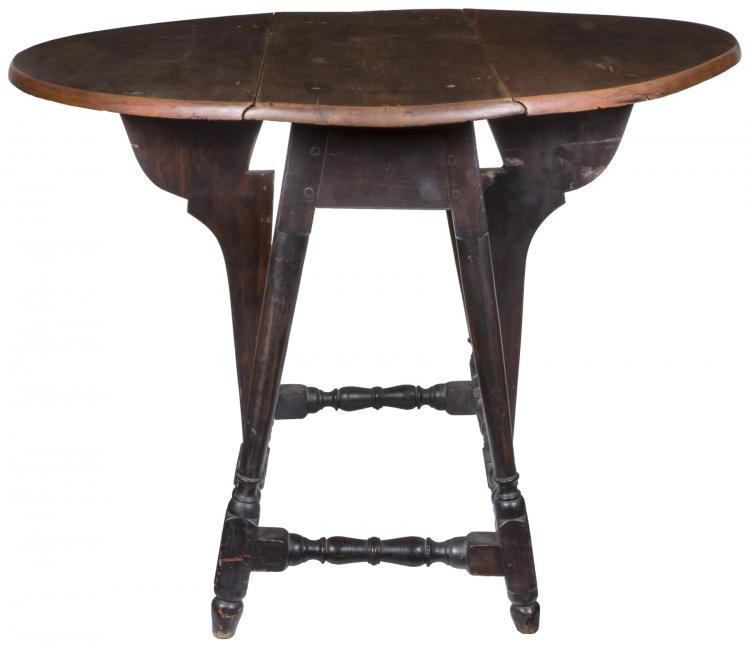 Butterfly tables have always been desirable because of their rarity and value for genuine examples.  Many of these have been faked and our example is completely original and in beautiful condition.  It is of full height, though most are reduced over time.   This table has been vetted by Alan Miller, a preeminent authority in the field, and the text of his report is shown below; this would give any owner great confidence in the authenticity of this rare find.

As for the table itself, it compares nicely to Albert Sack’s Good, Better, Best examples for the butterfly form (see included image).  Some of these tables have nondescript butterfly swings, but ours are fully developed.   Also, whereas most of these have plain boxed stretchers, ours are beautifully turned, giving a striking appearance.   The legs are tapered baluster, which work well with the highly developed stretchers.  The top is an old scrubbed top with minor patches; it had a real life.

If ever one wanted a fine example with full height, of unquestioned integrity, and retaining its old black surface and scrubbed top, this would be the object of desire.

On April 7, 1989, I received a cherry New England butterfly table from the dealer J---------.   I took the table to my shop near Quakertown and examined it on April 10 and 11 in order to determine its authenticity and state of originality on behalf of its owner, R----------.   The results of that examination follow.

This is a genuine American antique butterfly table from the eighteenth centuryand all of its main parts are original to it.  The frame, if I remember correctly, has never been disassembled and there is evidence of hand turning marks and appropriate shrinkage on the turned members.  There is checking from moisture loss on the end grain surfaces of the legs, as should be the case.  When the top was removed, every hole in the top met a corresponding hole in the top of the frame.    The end of the top, which seems to have two extra pins actually has been nailed and plugged this century.  This is a common occurrence.  The pivots of the butterfly leg supports apparently were through the top, and the holes which resulted have been patched.   The print of the frame on the underside of the top is very convincing of the original conjoining of these parts.   There is appropriate discoloration on the underside of the top outside of the frame – with some finish; over the frame with little discoloration, compression from contact with the leg tops, and inside the frame with more profound discoloration due to open access to the dirt and air.   The marks of the hand planes which produced the top are clearly evident.   The rule joint hinges are forge welded iron and original to this table.  Every hinge screw hole on the underside of the top center and leaves was made by screws used with these hinges.

The genuine nature of the leaves is more complicated to understand but is certainly true.  One leaf has a double set of screw holes about 5/16” to ¼” apart for the hinges with the currently operative holes being those closer to the outside of the leaf.   The other leaf has similar evidence 1/8” from the first holes.    What has happened is this: The edge of the rule joint on each leaf was wearing and one leg probably had areas splintered away in this area.    To repair this defect, the rule joint was remolded, moving it closer to the outside edge of the leaf.  The hinge mortises were extended to accommodate the new position in the leaves and the new holes were drilled and the top was reassembled.   Small spacer strips of wood were nailed to the tops of the butterfly leaf supports at one time, probably because wear had dropped them lower into the stretchers and the leaves were drooping slightly when up.   Apparently, the wood split away, leaving only the nails.   The top was forced down on these nails, producing the holes in the undersides of the leaves.   Eventually, this did not prevent the owners of the table from operating the leaves and the nails scratched their under surfaces.   The edge of the top has to have been slightly reworked when the rule joint repair was made.   Finish has been added to some inner areas of the table but these parts nonetheless are genuine. 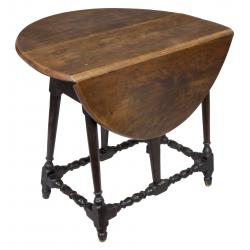 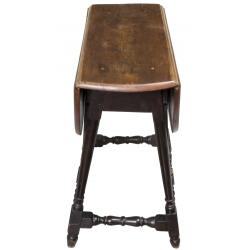 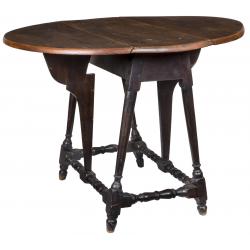 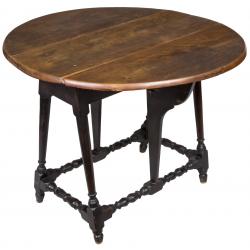 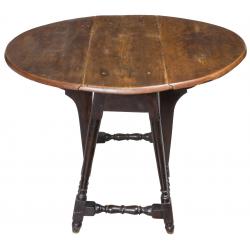 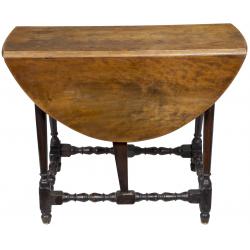 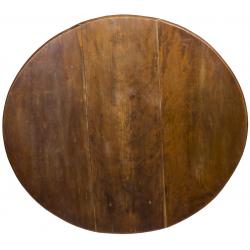 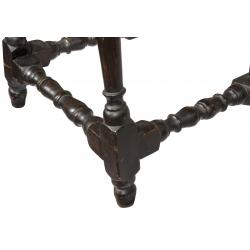 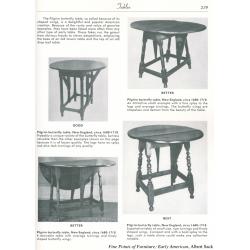