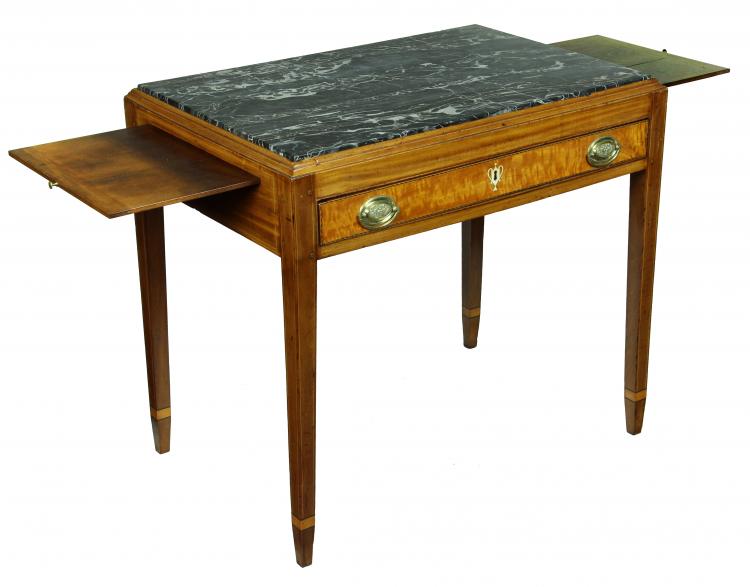 Description: Double-tapered legs are tapered on all four sides, terminating in tall tapered feet which are set off with satinwood ankle-cuff inlays bordered by ebony stringing. The frieze rails are joined to the legs with mortise and tenon joints with two wood pins per tenon. The through-pins are original. A double line of white stringing runs up the legs above the cuff inlays. The tops of the legs have large, neat chamfers cut on the two inner edges.

The front frieze is composed of a wide upper and narrow lower rail, each framed with a simple white veneer stringing surround. The drawer front is veneered with a panel of curly-figured satinwood, surrounded at the edges with lines of simple dark-light veneer stringing. The drawer opening is framed with thin cockbead moldings applied to inner surfaces of the legs and front rails. Mahogany side rails of the frieze are without ornamentation. Thin mahogany panels/slides pull out from both side rails for additional serving surfaces, each with mahogany "breadboard" ends applied with tongue-and-groove joints. These mahogany slides are grooved into 3/4" pine rails which run side-to-side and join to the end rails ofthe table frame at the top. These two grooved pine rails are joined at the center with a small pine front-to-hack mid rail. Replacement stop block strips (of poplar?) are screwed to the tops of the mahogany slides near the rear.

The drawer comers are dovetailed with very neat dovetails. Edges of the pine drawer bottom are tapered on the bottom and fit into grooves cut into the drawer sides and front. The bottom is nailed at the rear up into the drawer back with two large hand-forged "rose-head" nails. There are no blue blocks on the underside of the drawer.

Moldings are applied to the tops of the legs and rails to serve as a frame for the marble top. These are secured with glue and fine hand-wrought brads. I pried the rear molding off--there is no evidence of any other nails or small wood pins having been used in its history.

The marble top is old with considerable wear on the top and chips on the chips on the comer edges and may be original. The underside is relatively smooth and flat, but with evidence of irregularity and hand workmanship.

Discussion and basis of attribution
: New England marble top tables of this form are rare in this early Federal or "neo-classical" period. A series of features appear to be characteristic of the work of John Seymour's work in Portland, Maine in the years after his immigration from Southwest England to Portland in 1784, or just after his subsequent move to Boston in 1792 or 1793. The double-tapered legs with tapering on four sides and ankle cuff inlays is very similar to a Pembroke table with a history of descent in the related Cutts-Thornton-Emery families of Maine. This table is attributed to Seymour during his period of Maine work.(1) Seymour always tapered his legs on all four sides unlike many other early New England makers. Seymour also favored the use of curly satinwood veneers, found here on the drawer front. He was perhaps the first Federal-era cabinetmaker in New England to use this very English decorative preference in his New England work.

Seymour also frequently combined secondary woods following both American and English habits. On the present table, the cherry rear rail mirrors his frequent use of that wood. Most commonly on other pieces, he used it for veneered drawer fronts or drawer sides, or for table rails as found here.

Although marble-top furniture is uncommon in early Federal New-England, a significant number of tables of varying form and sideboards with marble tops are documented or firmly attributable to John Seymour, or after 1793 to him working with his son Thomas in Boston as John Seymour and Son. In all examples of their marble top furniture, the marble is framed with wood molding surrounds, as is found on the present example. A pair of marble top pier tables for example with marble of similar character has a firm history of descent in the Portland, Maine family of Nathaniel Deering.(2) One is pictured in a 19th century photograph of the Deering house. The molding pattern used on this pair of tables is identical to the pattern on the present mixing table.

Another key feature is the beautifully rendered bone keyhole inlay depicting a classical vase with curving handles. This shows up in several variations on numerous pieces by the Seymours, most frequently on sideboards.(3) No other New England maker is known to have used bone or ivory inlays of this distinctive pattern.

Workmanship on secondary areas of the present table is not obsessively neat as Thomas Seymour's later Boston work typically was. But this somewhat more hasty work on less visible areas does reflect the known pieces of John Seymour's Maine work. He was trained and worked principally as a joiner in England, with cabinetmaking being a secondary trade. Receipts and documents for this period indicate that three of his four young and less-skilled sons often worked with their father in Portland-John Jr. (died 1793), Joseph, and Thomas. The youngest son Samuel is not recorded in Portland-era accounts. The less-practiced hands of these sons may be responsible for the less finished hidden details found here. John Jr. was principally a decorative painter, Joseph and Samuel later became engravers initially in Boston, later in Philadelphia. Only Thomas later followed his father's trade.

It is worth noting that not all features of the table exactly match the habits of John Seymour's typical shop practices. For example, there are no glue blocks on the underside of the drawers. There are no pairs of chalk numbers on interior drawer parts to match the parts during assembly. The tenon pins for the table frame are visible on the outside--he typically used no pins, though in this case he may have judged them necessary because of the heavy weight of the marble on a light frame.

In short, there are enough distinctive features of this mixing table that match John Seymour's practices that it can be assigned as probably by him, possibly working with one or more of his sons.

Repairs, restorations:
No veneer repairs or replacements were found. Satinwood and ebony ankle-cuff inlays appear to be replacements due to their pristine appearance and the plain grain of the satinwood. Hardware is replaced. Stop blocks/cleats for the serving slides are replaced. A crack in the left front leg has been repaired and is now sound. Refinished. 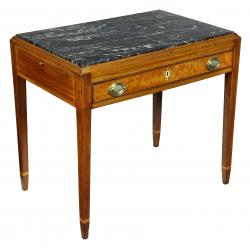 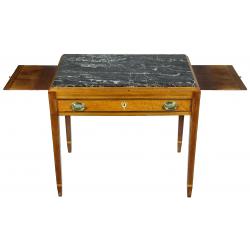 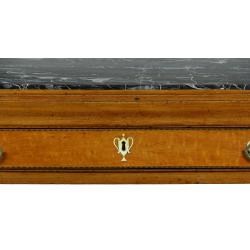 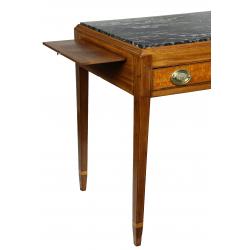 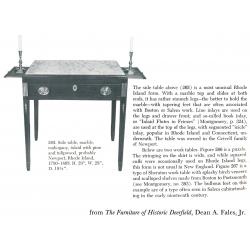 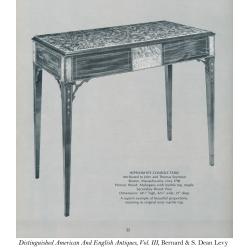