These are exceptional card tables with exceptionally large lyres that relate to the famous card tables made by Seymour for the Cleopatra's Barge in Boston, which are now at the Essex Peabody Museum and shown in Robert Mussey's seminal book on Seymour Furniture. Our tables follow the same format as the ones at the Essex, which, designwise, are later, in a more Empire style, as compared to ours, which have a lighter aspect with Hepplewhite style contrasting woods.

Interestingly, the casters are the same as those on another Seymour table of ours (See sw00946) and these are very rarely found…Mussey enjoyed seeing their connection to our other table.

Of note is the absolutely fabulous solid figured mahogany leaves. They are the best of the best (see details below). Attached is the illustration from Mussey's book, as well as his write-up on these tables.

These are masterpiece tables.

Object(s): Pair of lyre base Federal period card tables, ca. 1812 - 1815; the top is of solid mahogany with canted corners; apron rails are faced with three panels of birds eye or blister-figured maple veneer, each panel framed with curly mahogany crossbanding veneer and a small beaded moldings; apron rails are supported by a pair of solid mahogany lyres with scrolling carved leafage and simulated lyre strings; lyres rest on a rectangular base plinth also with canted corners; base is supported by four scrolling legs, each leg with three large reeded moldings, and terminating in reeded brass foot mounts with spherical casters.

Inscriptions: None found. An old paper label pasted on the rear rail of one table has a handwritten "16" on it. There is an old "Lyon Van" shipper's label on the rear rail of the same table.
Other materials: Brass floral mounts on canted corners of apron rails and base plinth (possibly original); reeded brass foot mounts with spherical casters; iron threaded bolt and nut as pivot point for rotation of top.

Discussion
This fine quality pair of tables is closely related to a larger group of Boston late-Federal furniture made in the shop of Thomas Seymour. These feature Seymour's interpretations of English Regency styles, including single or pairs of lyre-supports of varying designs (here solid, but sometimes open with brass wire strings); apron rails veneered with several panels of birds eye or blistered maple veneers, the blister-figure sometimes heightened by scorching the surface to accentuate natural wood figure (as found here); base plinths veneered with similar maple inlay panels; curving legs with upper faces reeded with large diameter reeds; fancy hardware mounts. The overall card table design employing a top which rotates to reveal an inner well for storing cards and playing pieces first appeared about this period in Boston, probably first introduced by Seymour based on English models. This design replaces the swing-leg universally used in Boston in earlier periods. These tables both use ash as the only secondary wood, one used in Boston only by the Seymours in this period. By the 1820's, the use of ash a secondary wood came into wider use in other Boston shops, apparently through Seymour's influence.

At least one group of furniture in this style is firmly documented to Thomas Seymour. The furniture was made for Boston and Medford, Mass. marine insurance magnate Peter Chardon Brooks in 1815 and 1816 for his Charles Bulfinch-designed country estate The Elms in Medford. A card table from this group is illustrated and discussed in Robert D. Mussey, Jr., The Furniture Masterworks of John and Thomas Seymour (Salem: Peabody Essex Museum, 2003), catalogue no. 111, pp 357-358. It descended directly in the Brooks family until acquired by a Newport, RI dealer, later by private collectors. Brooks also recorded the purchase of a pair of "Grecian" card tables from Thomas Seymour and a pair of "slab" (marble top pier) tables in his financial Waste Book (Massachusetts Historical Society, see Mussey, op. cit, pp 286, 360). Brooks gave all four tables and at least one other to his daughter Abigail at or after her marriage to Charles Francis Adams, son of John Quincy Adams and grandson of John and Abigail Adams. Upon the death of John Adams, Charles and his wife used the Adams House in Quincy, Mass., former home of the President, as their country estate, and the four tables remain in the collection there today.

Another lyre base table with generally similar design, also firmly attributable to Thomas Seymour, is the historic house collection of the Nichols House Museum, Mr. Vernon Street, Boston. Although the lyre supports differ in design and lack the carving found here, the table employs the same contrasting birds-eye maple veneer panels with the maple figure heightened by scorching with a hot iron poker held near the wood surface. Plinth and leg designs are also similar to those on the present tables.

A wonderful suite of bedroom furniture, including a tall-post bed, a basin stand and a lyre-base card table is very similar in design, detailing, in the use of ash secondary wood, and in veneer species and treatment. The suite is in the Davenport-Wakefield Estate, Milton, Mass. The entire group is also firmly attributable to Thomas Seymour, although it is not yet clear precisely which of the family members bought the suite. It also dates from about 1815. It is the only suite of furniture known to be made by Seymour which remains in its original house setting.

The present tables are typical of Seymour's work on the above-cited furniture in employing a superb selection of highly figured solid woods and veneers. Here, table tops are made of dense, solid mahogany with very nice figure. On one, the grain lines make arching lines around a small knot; on the other, the arched lines are centered on a small knot which falls beyond the end of the table and was cut off at original manufacture. Both lower tops are also solid, but of somewhat plainer figure than on upper tops. As with virtually all of Seymour's table tops in this style, the top edges are molded.

The choice of veneers also follows Thomas Seymour's habits on this style of furniture. Birds-eye and blister-figured maple veneers have the natural figure heightened or accentuated by selective scorching with a hot iron poker. This is more visible on some of the veneer panels where the veneer was not sanded as heavily during previous refinishing. Both tables have maple veneer panels framed with borders of crossbanding veneers of curly mahogany veneer, a favorite habit of the Seymour shop.

The use of ash as the sole secondary wood on both tables is noteworthy. Only the Seymour shop used ash as a prominent secondary wood on case pieces in this period. It was not until 5-10 years later, when Seymour went out of business (after 1817) and began work as foreman for other large successful Boston shops, did ash also appear in work of these other shops.

Construction of the interior well of the tables also matches the documented Peter Chardon Brooks card table by Seymour formerly at his country estate. The well is formed by the 4 apron rails, joined front-to-back with a wide mid-rail (ash) dovetailed to front and rear apron rails. Two thin 1/4" ash panels then are fit into grooves at the bottom of the rail assembly. Side apron rails are joined at the rear to the rear rail with very neat dovetails. The construction is clearly visible at the rear.

The pair of marbled top pier tables by Seymour at the Adams House employ stamped brass mounts at the corners of the apron rails, of a geometric floral pattern. The pattern is generally similar to the brass floral mounts on the present tables, but these are solid brass castings and not thin stamped metal. I have not previously seen such solid cast mounts on other furniture by Seymour of this period - normally they are stamped of thin sheet brass. They may possibly be old replacements. However, it is also possible that if the tables were made during the War of 1812 when all trade between Boston and England was cut off, cabinetmakers resorted to having lower quality simulations of English hardware cast locally. The evidence to me is not definitive on their being either original or replacements.

Prior repairs, restorations
Overall, both tables are in fine overall condition, and normal minor repairs only were found. Both were previously refinished throughout at some unknown time. One leg had a screw added to the underside to strengthen its joint to the base plinth. A leg on the other table had an old iron repair bracket added under a leg for repair. Both tables have had the lyre supports removed from and reglued to the base plinths - note the very small veneer losses along edges of the mortises in the top surfaces of the plinths. One table has had the top and apron rail assembly re-screwed in slightly different locations onto the central ash support block below, and the old screw holes neatly filled with wood plugs. Both tables are missing their left-side interior bottom boards of the "wells." The interior secondary surfaces of the "wells" of both tables under the tops was varnished at some point. There are no prior veneer, molding or carving losses or repairs noted. 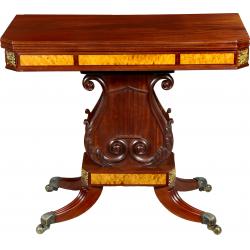 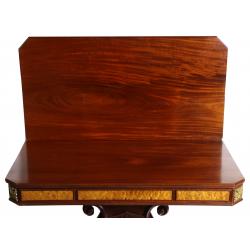 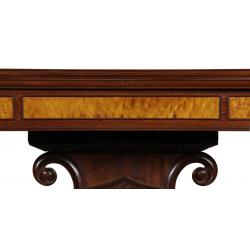 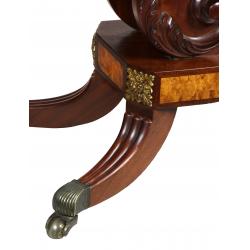 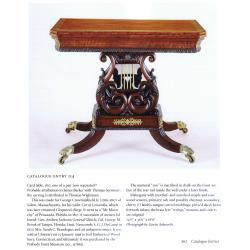