A Mahogany and Birds Eye Maple Side or Pier Table with carved Lyre Base, ca. 1812-1817, Boston, Thomas Seymour 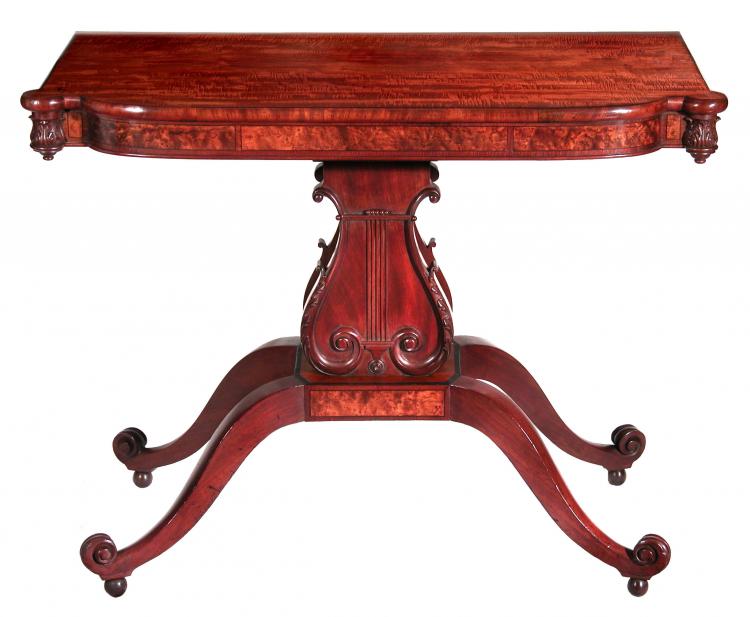 
Thomas Seymour was the first cabinetmaker at the end of the Federal period in Boston to adopt and introduce the latest English furniture styles, today termed "Regency" and incorporating a wide range of new designs. In1809, his first newspaper advertisement appeared in Boston touting the "latest designs, altogether new in this country." His production starting that year included designs adapted from Thomas Sheraton's 1803 Cabinet Dictionary, including both wood and marble top pier tables based directly on Sheraton's. Others of his new productions must have been based directly on newly imported English furniture which remained in demand among Boston's wealthy merchants. His father John Seymour had retired by the time this table was made.

Thomas Seymour's new productions in this later period of his career included numerous types of lyre-base tables, most commonly called "harp-base" in period advertisements. This is one of many of his many variations on the idea. Some incorporated brass wire representing strings. A pier table made by Seymour and painted and signed by John Penniman incorporates four superb painted and gilt supporting lyres. Others employ lyre-form supports with ebonized veneers inlaid to simulate mock fluting. Another group features rosewood veneers with gilt and painted leafage on both curving lyre-edges. The present example substitutes carved versions of the same leafage along lyre edges.

The present table has the overall form of a card table but was clearly designed as a side table, as it has only one top and not two hinged tops. Evidence is clear that it never had hinges, as the mahogany cross-grain moldings on the edges of the top at rear have continuous grain with no repairs. I have encountered only one other side table with wood top among Seymour's work from this period.1 It is a full 36" tall so was evidently intended for use as a pier table, probably with a large gilt mirror above. The present table's lower height of 28 3/4" suggests its use was as a side table instead.

A number of features of design, wood choice and construction clearly tie this to the Seymour shop. The extensive use of ash as the secondary wood here was unique in Boston to the Seymour shop. The use of birds eye maple veneer panels framed by single line stringing and curly mahogany crossbanding mirrors one of his favorite treatments. The wood choice for the top is a beautiful mottled/curly mahogany, reflecting again one of his favorite preferences.

The use of leafage-carved and applied turret corners exactly copies the cornice of a bed by Seymour which I studied recently (see attached photo). The bed remains in its original historic house setting along with thirteen other pieces by Seymour. The carving is in the distinctive crisp, sharp London style of Seymour's favorite carver, the London immigrant Thomas Wightman. The leafage carving on the lyres also mimics Wightman's leafage on other card tables and the curving mirror brackets of several dressing tables with mirrors by Seymour.2 The cornice of the bed similarly features birds eye maple veneer with ebonized stringing border and curly mahogany crossbanding frames. It's secondary wood is principally ash. It is clear these two pieces of furniture were made in Seymour's shop at the same time, and were originally perhaps part of the same suite of furniture.

The construction details throughout reflect the precision, refinement and labor-intensive details typical of Seymour's work, the cost of which probably led to his ultimate business failure in 1817. Note for example the rounded top-edge moldings surround the front turret corners of the top. These are not bent around the corners as in the usual method. They are in fact turned out of solid mahogany, then the center cut out to conform exactly to the curve of the top corners. This prevented any cracking of the cross-grain molding and the later delamination which often occurred with bent moldings. Note also the beaded molding applied to lower edges of the rail - these return around the front turret corners which have a similar molding incorporated into the turning pattern. This features appears again and again in Seymour's work on various furniture forms.

This rare table embodies the innovative designs which Seymour was continually experimenting with and introducing to Boston, and reflects his typical meticulous choice of wood and construction methods. 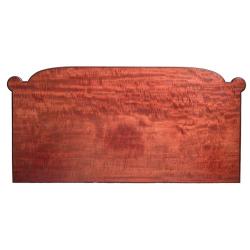 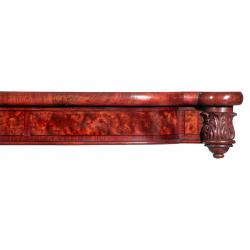 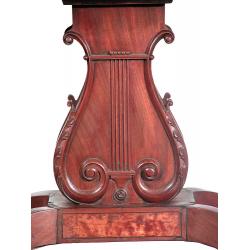 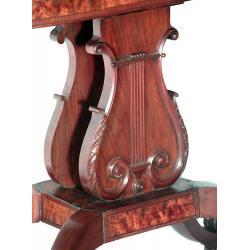 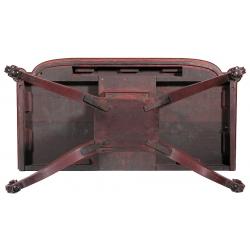 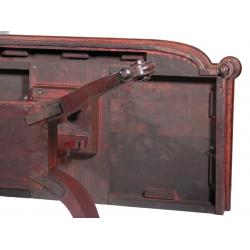 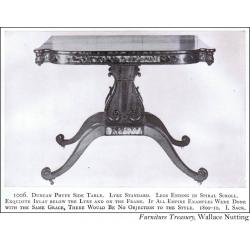 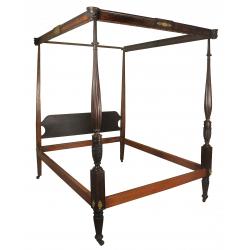