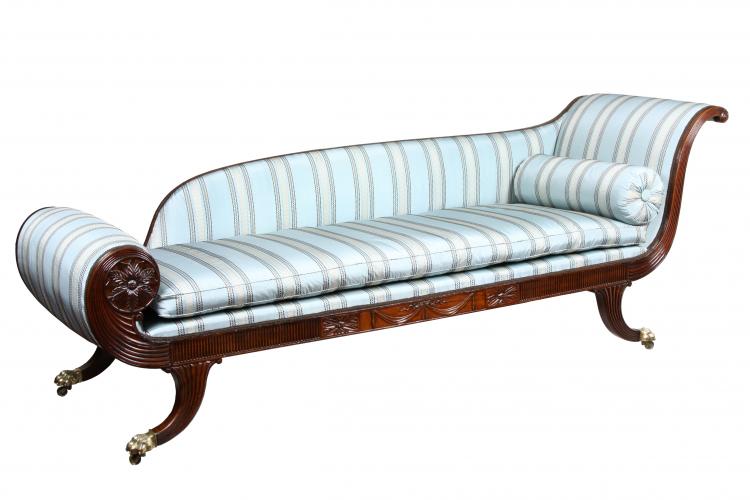 This recamier is in pristine condition, see images prior to reupholstery. It is special in that it is quite long, and can nicely accommodate a six-foot person. One of these is illustrated in the famous Kaufman Collection.

I have examined the following and found it to be as described below:
A Very Rare Grecian Couch or Recamier attributed to the workshop of Duncan Phyfe, New York City, circa 1805

Reference: A Recamier with similar carving and of similar concept is in the collection of George and Linda Kaufman, and is illustrated in Michael Flanagan, American Furniture from the Kaufman Collection, figure 58. Of special interest is the oversized carved rosette at the foot of the Recamier.

The Recamier sofa is a rare form, and few American examples have survived. The large carved rosette appears to be by the same hand as the Recamier in the George and Linda Kaufman Collection. The four carved legs are reeded and end in wooden cuffs and brass paw feet on castors. The brass castors are original, ands its wheels are original, but were moved and reattached at one time. We have returned them to their original position. The font rail is carved with a bowknot and drapery swag central panel, surrounded by carved rosettes, vertical flutes, and horizontal reeds on the back support and foot support. The foot support is carved with an oversized rosette of six petals. There is a line of mahogany wood trim on the upper edge of the back. The Recamier retails an old dark patina, and has its original interior wood support elements with only few exceptions. There are two new glue blocks for the two original cross supports, and one cross support of later date is made of chestnut. The Recamier is in the best condition, and has no major restorations or replacements. 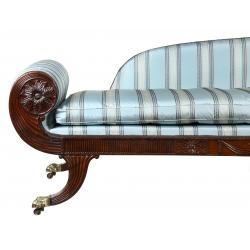 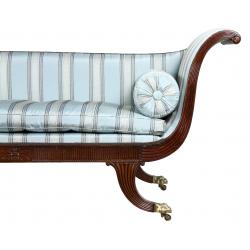 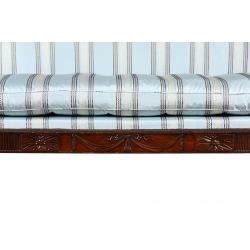 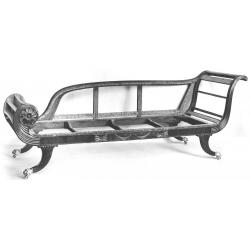 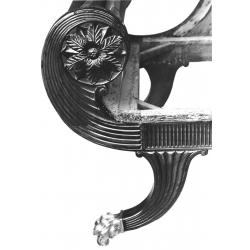 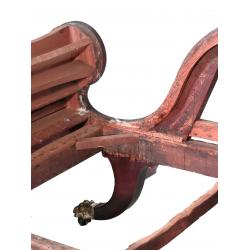 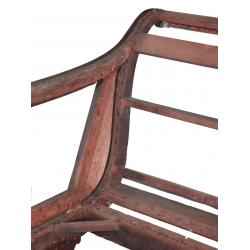 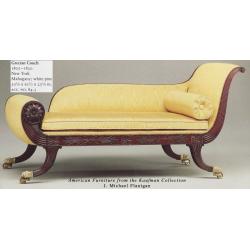