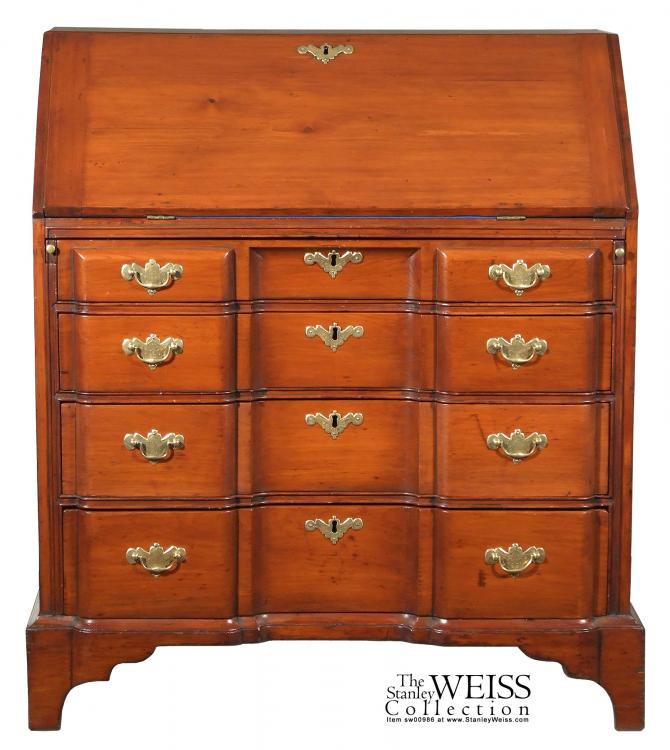 This small desk, 36 in. wide, "dating from the mid-to-later 1730s… is the earliest, surviving Boston blockfront slant-lid desk" according to Alan Miller, who is one of the finest scholars of American furniture, and has researched this piece, and whose lengthy analysis is herewith included:

A red cedar Boston block-front desk owned by Jonathan Trace   This small desk was produced by the shop discussed in my article Roman Gusto in New England: An Eighteenth Century Boston. Furniture Designer and his Shop, published in the 1993 Chipstone Journal, American Furniture, edited by Luke Beckerdite. This shop was the premier carriage trade furniture enterprise in Boston at the time and was also the most important proponent of the avant-garde of Palladian classicism and the Georgian style in that city. A member of the earliest group of case furniture with blocked drawers made in Boston, almost certainly dating from the mid to later 1730's.  It is entirely possible that this is the earliest surviving Boston block-front slant lid desk.  A slightly later--in that the bracket foot design has progressed--walnut desk from this same shop is dated 1739 (figure 6 in Roman Gusto and Lot 1349 The Jacob Paxon Temple Collection Quarterly American Furniture, Anderson Galleries, 1922).  The famous Coit desk-and-bookcase at Winterthur, dated 1738, is a poorly executed knock-off of the work of the shop which produced this desk~ which quite rensonably pre-dates both dated examples. Its original early chased brasses and first-generation straight bracket feet-matching those of the Milwaukee Art Museum desk-and-bookcase (ibid. figures 1,2,3, and 4a)--·establish its early position the shop's output.

In 1993, I speculated that William Price was a likely candidate as the designer whose ideas propelled this shop, and I still feel this is likely. Since the Roman Gusto article was published, the Levy Gallery discovered an elaborate walnut desk very like the Jacob Paxon Temple example mentioned above, with an inscription. "Made by Robert Walker .... bound to the above of this same town and country."  Thus, Mr. Walker obviously worked in this shop, as did George Glinn, whose name appears on the label of the clock now at the Art Institute of Chicago (ibid. figures 27-30). In Brock Jobe's essay, The Boston Furniture lndustry 1720-1740, compiled in Boston Furniture of the Eighteenth Century, 1974, The Colonial Society of Massachusetts, he writes. "On June 15, 17381 John Mudge billed his employer L3:3:0 for a “Larg Sedor desk with a star and scolup dros, no well rume, Lap heeded and pilor dros.”  While Mudge's desk had a familiar inlaid star, it was not a block-front.

Red cedar was not a cheap alternative to hardwoods in colonial Boston. It was an imported exotic and had been since the seventeenth century. Its insect and rot resistant qualities made it desirable for furniture exported to the tropics and its wonderful aroma thought to promote health, creamy smooth texture, pink color, and association with the Biblical Cedar of Lebanon made it generally prized. In John Evelyn's 1663-1664 British book, SYLVA. Or A Discourse of FOREST TREES, and the Propagation of Timber In His MAJESTIES Domains, he laments “The Cedar? Which grows in all extreams: In the moist Barbados; the hot Bermudas, the cold New England ... and we might have of the very best kind in the World from the Summer lslands, though now almost utterly exhausted there also, and so the most incomparable of that sacred wood like to be quite destroy 'd by our Negligence, which is by nature almost eternal.” Evelyn was expressing the opinion of his time that cedar wood had a virtue or blessing which rendered it impervious to corruption.  The newly discovered 1772 Philadelphia book, Prices of Cabinet and Chairwork, owned by the Philadelphia Museum of Art, mentions at more than one instance, "red cedar (costs) the same as mahogany."  Clearly red cedar had quite a cache.  It was one of the two primary woods of the renowned Milwaukee Art Museum desk and bookcase mentioned above, as it comprised the elaborate interiors of both desk and bookcase. In the seventeenth and eighteenth centuries, 'cedar' apparently meant an aromatic wood. The cedar name was applied to Havana cedar (Cedrela odorata), white cedar (Chamaecyparis thyoides), and red cedar (Juniperus sp.), as well as the true cedars (Cedrus sp.) like cedar of Lebanon (c. libani), which is only faintly aromatic. This red cedar botanically is Juniperus sp. Microanalysis cannot determine differences between the three New World species used in commerce: virginiana, the scrubby northern juniper of the Mid-Atlantic and southern New England: silicicola, from the coastal southeast of the United States; and bermudiana from the Caribbean. However, the clear nature of the timber used in this desk, free of bark and sapwood intrusions and pin knots, clearly indicates either Juniperus silicicoia or hermudia. This desk, except for some minor white pine glue blocks, is made entirely of red cedar, both its primary and secondary components. The virtue and fragrance of the cedar permeated all its drawers and compartments.

All of the desk's brasses are original except for the prospect door escutcheon, which was restored so that the pins which fasten it to the door occupy the holes made by the original fasteners. What is unusual about the imported British chased handle and escutcheon plates is their remarkably high quality. This brass is not of the export grade encountered in colonial American work; it is of a standard typically encountered only on London or courtly British furniture.  Imported hardware of this quality clearly speaks of the high concept of this desk.  The drawer and prospect door locks are original.  The lid lock is the period lock but not the lid's first.  The prospect door and lid hinges are original.  The iron keys are replacements.

While the interior of this desk, with straight fronted small drawers and a plain prospect door, is more simple than the other examples illustrated, this desk can't be considered an economy model in the general framework of Boston furniture manufacture. Its interior is simplified, but compensates with four document drawers.  It is a blocked facade is as carefully executed as that of any product of this shop.  The small lid supports which do not intrude on the top drawer, the sliding dovetails joining the top drawer sides to the front, the scheme of the blocking and base molding construction, the foot construction and blocking, and all other construction and design details are entirely in common with the other furniture produced by this trend setting shop.

It is interesting that red cedar was as valuable as mahogany and considered an exotic wood. The quality of this cedar, as you can see, is clear with deep color. The interior is also quite exceptional, with four columnar document drawers, the central two which combine with the prospect door making a pull-out compartment. This is a "full interior" with functional valances (pencil drawers)…something usually found in Newport desks. As Alan Miller notes, it is quite exceptional, having most of its original brasses and of the finest English import quality. 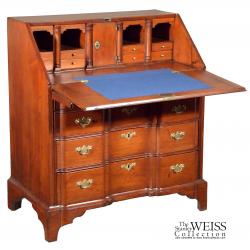 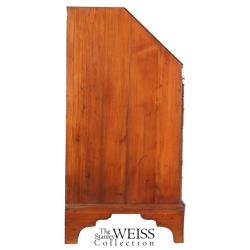 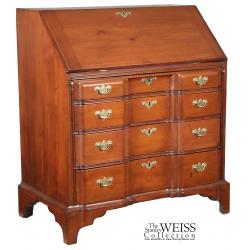 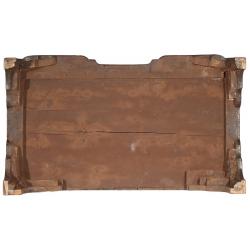 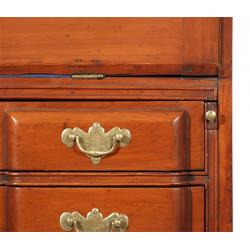 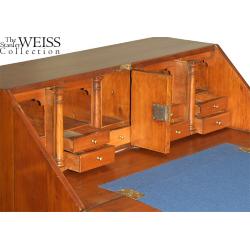 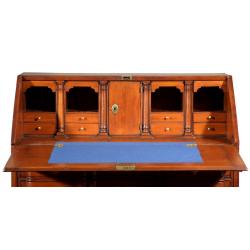 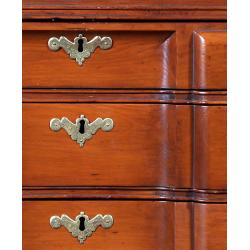 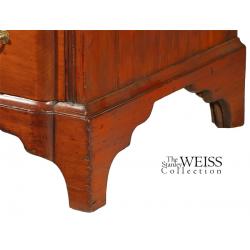 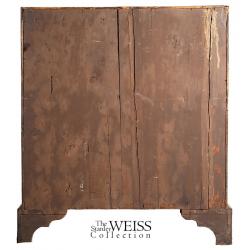 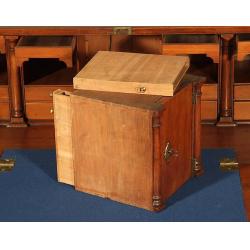