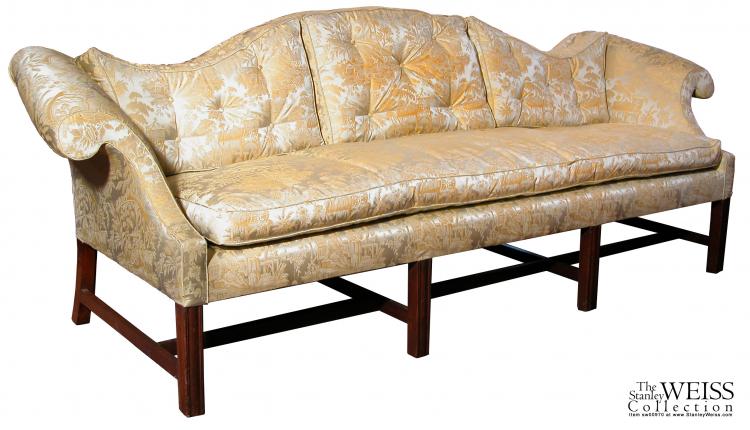 Condition: In fine condition with orignal construction throughout and a fine old surface to the straight molded mahogany legs. The tulip poplar and maple secondary wood is in good condition with normal signs of multiple upholstery over the years. Some of the original wrought iron nails used for the webbing and under-upholstery are still intact.

Provenance: This fine Chippendale mahogany sofa features the important history of ownership by General Henry Champion (1751-1836) of Colchester, Connecticut. The sofa was constructed in Philadelphia, Pennsylvania and is dated "1786" multiple times in red pencil on the right arm. A Sofa is listed in General Champion's Estate Inventory that is held in the collection of The Connecticut Historical Society, "The Henry Champion Papers", Box 80. The inventory is dated Sept. 7, 1836, and found on page 7 is "Sofa - $8.00." The sofa is comparable in value to a Secretary - $8.00 and a Sideboard - $14.00 also listed in the Inventory. The high comparable value of the Sofa suggests is was a finely made and respected piece of furniture. The Sofa descended within the Champion family and was purchased by Nathan Liverant and Son Antiques in 2007 from a direct descendant of General Champion.
General Henry Champion was the son of Colonel Henry Champion (1723-1797) and Deborah Brainard (1724-1789) of East Haddam and Colchester, Connecticut. General Champion was a noted officer in the Revolutionary War with service beginning with the Lexington Arm and continuing to the end of the War. He began his service as a Ensign with the East Haddam Militia and was promoted to First Lieutenant of the 8th Company, 2nd Regimen. In June 1775 he led his Company at the Battle of Bunker Hill. In December 1775, he was commissioned a Second Lieutenant of the 22nd Regimen and named an Adjunct on the staff of General Wyllys. In August of 1776, General Champion was active in the Battle of Long Island and the difficult retreat to White Plains. In October 1776, Champion was promoted to Captain with 86 men under his command. Then in January 1777, he was named Captain of the First Connecticut Line of the Continental Army. He served in this cpacity until 1779 when he was appointed an acting Major of Meigs' Regiment of the First Battalion Light Brigade, organized by General Washington for the capture of Stony Point on the Hudson River. Serving under General Anthony Wayne, General Champion and his Light Infantry were instrumental in the capture of the strategic promontory on July 16, 1779. General Champion is known to have celebrated the important victory at Stony Point for many years at his home in Colchester. In May of 1780 Champoin retired his military position at the request of his father, Commissary General Henry Champion (1723-1797), "whose advanced age and weight of business, in his opinion, made my assistance indispensible." General Champion served in the Commissary Department with his father providing food and supplies to the Troops until the end of the War.

General Champion was married on October 10, 1781 to Abigail Tinker (1758-1818) of East Haddam. The Sofa is dated on the arm 1786 and may have been purchased as the young couple set up their home in Westchester Parish of Colchester. General Champion's home still stands as a fine example of Post-Revolutionary War Georgian architecture in Connecticut. In his capacity as a Continental Officer, and a member of the Commissary Department, General Champion would have had access to the Continental Congress meeting in Philadelphia, where he and his agents were heavily involved. It is possible that this access led to the acquisition of this fine Philadelphia--made Chippendale sofa for his home in Colchester.

After the War, General Champion's service in the Continental Army was recognized and he was rewarded with a membership in the Continental Branch of the Society of the Cincinnati. He continued his life of public service and in May 1799 he was appointed Major General of the First Division of Connecticut Militia. He also served as a Representative to the General Assembly from 1786 to 1820, where he was elected to 24 sessions.

This Sofa is listed on Page 7 of Henry Champion's Estate Inventory, dated September 7, 1836. It was sold at the Estate Auction to "A. Olmstead," possibly Aaron Olstead (1760-1838 of East Haddam, Connecticut. Aaron was the cousin of Henry's wife Abigail Tinker, whose parents were Abigail Olmstead (1735-1773) and Sylvanus Tinker who married in 1755. The Sofa descended in the Champion Family and was purchased by Nathan Liverant and Son Antiques from a direct descendant of General Henry Champion after a 50 year pursuit. It is accompanied by a letter which reads as follows: "Dear Arthur, The Chippendale Sofa which I sold to you on --- 2007 - This Sofa was owned by General Henry Champion. I am a direct descendant of Henry Champion, it was passed down to me through the family lineage. Thanks. ----" 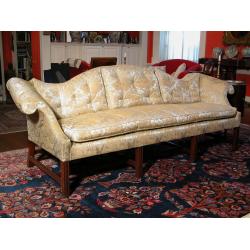 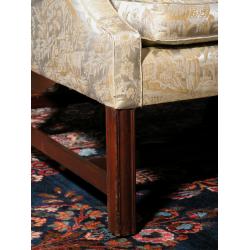